Life in the Time of Corona Detail for Emerald Coast Writers 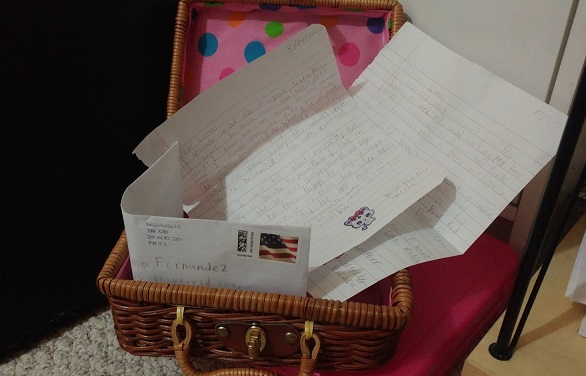 One unexpected, positive thing that has come out of this pandemic has been pen pals for my two children. As the virus surged in mid-July, our family decided to continue staying home to avoid crowds. I looked for ways to enrich my children and allow them to socialize. A friend told me about an online learning site called Outschool. It has classes for families that range from math to science to history and also offers hundreds of unique activities for kids younger than the age of 18 — from art to theater to pop culture. It was there that I discovered a class on letter-writing and pen pals.

I could hardly contain my excitement when both of my daughters agreed to take a pen pal class, the same one at the same time! This was unheard of in our household. My girls are 12 and 8 years old and sometimes act like being around each other is the real virus!  Yet they were eager to take a class that could gain them potential friends.

I was ecstatic over their decision. It brought back so many fond memories. I had a pen pal growing up. We wrote letters to each other for three years. My mom was a teacher in Louisiana and learned about a letter-writing program with another teacher in New Jersey. Each of their fifth-grade classes wrote to each other during the course of a school year. That teacher had a daughter who was a year younger than me so we can began writing to each other.

What a joy it was to receive Julie’s letters in the mail. It was as thrilling as receiving Highlights magazines addressed to me. Getting any kind of mail was always a joy. There was only snail mail in the 1980s and early 1990s. Yet even in my college years I continued to write summer letters to a friend who, like me, preferred the slow art of putting pen to paper over sending emails.

My 12-year-old daughter Vivian received limited training from a previous teacher on how to write the parts of a letter, but she never addressed an envelope. My eight-year-old daughter Lana never wrote a “proper” letter, but now knows to include a date, greeting, body, closing and inquiries to her pen pal. She took the tasks seriously as I heard her repeating aloud the instructor’s words for including a “proper salutation and closing remarks.”

This pen pal writing class met three times, one day per week for 45 minutes. The first and second class went over the parts of the letter and included mingling opportunities for each child to get to know one another. My two girls in Pensacola were in the class with a 9-year-old boy living in California, a 9-year-old girl living in Tennessee and a 10-year-old girl living in Peru (Yes, Western South America!). For the Peruvian pen pal, the only option was email since the teacher did not know how long a letter would take to mail. We arranged for email addresses to be exchanged and then letters to be sent via email.

Since the class had an odd number of five participants, Vivian was paired with two pen pals – the Peruvian girl and the girl in Tennessee. Lana was paired with Vincent, the boy in California.

Seeing the excitement of my girls upon  receiving letters from their pen pals brought me more happiness than I experienced in months. We never would have taken such a class like this if it weren’t for the pandemic occurring and my need to find creative entertainment.

The class finished in mid-August, but letters are still coming and going. Vincent, the pen pal from California, asked my youngest daughter Lana to join his online book club, and she has. He hosts monthly video chats where a group of children discusses books. They have spoken on the phone too and video chatted with each other on a few occasions.

The teacher gave me each parent’s email address, so I reached out to all them to thank them for bringing my children joy during this weird, uncertain time. Vincent’s mom Brittany was the only parent to write me back. We have since become Facebook friends and exchanged messages and compliments about our children.

Life in the Time of Corona

Within weeks after March 11, 2020 World Health Organization’s declaration of COVID-19 as a pandemic, West Florida Literary Federation offered its writers a catharsis. By April, regional writers were submitting words and images to preserve this time in history. The ongoing project began with Phase I, a special edition of The Legend published in May. It featured more than thirty juried submissions. Life in the Time of Corona continues with Phase II, updated as submissions are accepted. Here are the voices of health care workers, poets, essayists, historians, and the images of artists and photographers, documenting this time in Northwest Florida's history. The ongoing project ends with the advent of a vaccine or declaration by the World Health Organization.

The Legend Special Edition Life in the Time of CoronaAuthor Biographies